Sandro Catanzaro is Chief Innovation Officer at dataxu. Prior to co-founding dataxu, Sandro held positions at Bain & Company and NASA, where he straddled the worlds of science and business strategy. Based on research he did at MIT, he co-invented the real-time optimization algorithm that lies at the core of the dataxu technology platform.Sandro is a respected industry thought leader and is a frequent speaker at events such as Cannes Lions, dmexco and the NAB Show. His perspective on the future of marketing, ranging from Programmatic TV to Advanced Analytics, has been influencing the industry for more than a decade.He is a founding member of the ABCD cross-functional PTV working group, which includes companies such as AOL, FOX, Havas, IPG and Omnicom Media Group; he is also a member of the I-COM Global Chief Analytics Officer Council.Sandro holds a MS from the MIT Sloan School of Management, a MS from MIT’s Department of Aeronautics and Astronautics, and a BS from the University of Buenos Aires. Prior to attending MIT, he launched five businesses in South America, including one that was acquired by Unilever. He is bilingual in English and Spanish. 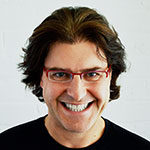