John is the co-founder and CEO of Data+Math. Previously, John served as the SVP and GM of Rovi’s Analytics business following the 2013 acquisition of IntegralReach. John was the CEO and co-founder of IntegralReach, which developed the first audience based sell-side system for TV. Under John’s leadership, IntegralReach’s analytics solutions were deployed by several major US cable and broadcast networks.

John holds an SM and SB in Mechanical Engineering from MIT. 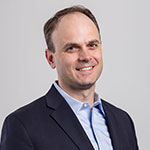