Mr. Lowy joined Telaria from DISH Network where he was responsible for the monetization of Sling TV, DISH Anywhere, advanced television products, and accelerating the convergence of TV and digital advertising. He was the architect and leader of Sling TV’s ad sales platform including revenue, strategy, partnerships and launching live linear television’s first dynamic ad insertion (DAI) platform including programmatic real-time auctions, cross platform addressable advertising and measurement. Prior to DISH, Mr. Lowy held multiple positions at Canoe Ventures, the cable industry consortium dedicated to progress the spread of advanced television capabilities. Prior to that, Mr. Lowy was Vice President of Branded Entertainment & Online Integration at CBS Television Distribution, as well as a Director of Affiliate Relations and General Manager of Program Operations at the ABC Television Network.

Mr. Lowy sits as Co-Chairman of the Interactive Advertising Bureau’s (IAB) Advanced TV Advisory Committee, and he is a member of the IAB’s Board of Directors for the Video Center of Excellence, a member of Freewheel’s Council for Premium Video, as well as a Digital committee member for the National Association of Broadcasters.

Mr. Lowy graduated from the Roy H. Park School of Communications at Ithaca College with a major in Television/Radio and a minor in Politics. 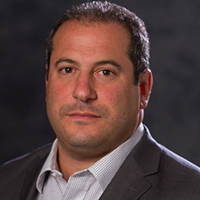