Gerber joined Essence in 2017 after spending six years as SVP, Client Development & Communications at ABC. Before ABC, he served as Chief Marketing Officer of Quantcast, where he was and an active industry evangelist for the digitally-oriented audience measurement and targeting company.

In earlier roles, Gerber served as Vice President, Associate Media Director at Ammirati Puris Lintas; Account Manager/Interactive Marketing for America Online and Media Supervisor/Media Planner for both JWT and D’Arcy Masius Benton & Bowles. He began his career as a paralegal at Sidley & Austin in Washington, DC.

Gerber has been named to Adweek’s Media All-Star and Mediaweek 50 lists. He also served as chairman of the 4A’s Interactive Marketing & New Media Committee from 2001-2003. He holds a B.S. degree in Journalism and a B.A. degree in International Relations from Boston University, and resides in Westchester with his wife and two children. 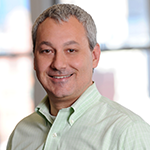